Strange Environs, my 12th studio ambient album, was composed in entirety between November 2014 and August 2015 in .

The concept and creative process for the album was influenced by my personal experiences exploring the desert and mountain regions of Southern California’s and surrounding areas. This region is characterized by strange, beautiful, and sometimes dangerous environs that provided me with an escape from the stresses of urban life. Examples of these environs include craggy peaks and ridges a mile above the desert floor; the shores of the Salton Sea, a strange sea in the desert with remnants of a bygone city and dead fish everywhere; Palomar Mountain, where the famous Hale telescope peers toward the firmament; and the barren desert plains and dunes, where by day the terrain is scorched by the sun and by night the sky reveals star clusters and syzygy of planets that are not visible under the blanket of city lights.

With this album, I once again make use of the interplay between light and dark, tension and repose. I focused on having heavy drones in the bass frequencies with flowing synth and string pads and melodies over the top. The underlying drones are dark, while the use of string pads and minimal melodies provide a since of lift and light. Unlike traditional classical or other modern styles of music, Ambient electronic music provides the freedom of unconventional of sounds and composition; the genre is not bound by any creative restrictions.

I used a combination of virtual synthesizers and hardware synthesizers, particularly virtual analogue synths from Alesis and Korg. Most all of lead melodic parts were tracked as live performances with out sequencing. I used Steinberg Cubase for my DAW. I painstakingly mixed and mastered the album in September of 2015 in my studio in (home to Wayfarer Records label). The album artwork was done by the extraordinary Michal Karcz. And yes, that is me standing on the ridge. 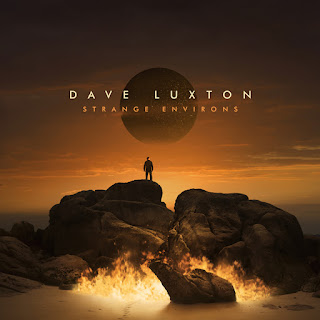 The album is to be listened to from beginning to end as one listening experience (how, in my opinion, albums should be listened to). I hope that those who enjoy this style of music will take pleasure in the exploration of moods and soundscapes of this album. Strange Environs is available now from iTunes, CDBaby, Amazon, Bandcamp, and other download/streaming sources.

Using the EBow in Ambient Music

The EBow (or “electronic bow”) is a hand-held, 9-volt battery-powered electronic device that is used for playing the electric guitar. Gregory S. Heet invented the EBow in the late 1960s. The EBow has been used by guitarists on countless albums across genres such as Genesis, Radiohead and Depeche Mode on the track “Walking in My Shoes”.

The EBow produces an electromagnetic field that when held over a metal electric guitar string produces a sustained sound that mimics a violin bow played across the strings. These sounds are created by a string driver that gets its input signal by an internal pickup, which works like a guitar pickup (composed of a Alinco-5 magnet). When the string is struck, the input coil senses its vibration. This movement causes a magnetic field to occur, and it induces a current in the input coil. Its output signal is amplified and drives a second coil, which creates a feedback loop that amplifies and sustains the string vibration at its resonant frequency (thus sustaining the note indefinitely).

The more recent versions of the ebow (Plus EBow) have a switch that enables use of a different mode, which produces a higher harmonic overtone. This effect provides a somewhat “nasally” yet musical tone which adds another dimension to the sound of the EBow. It is similar to reverse phasing a coil in a humbucking guitar pickup.

The ebow allows for vibrating just one string at a time, thus, it is most typical to play single string scales up and down the neck of the guitar. You can switch from one string to another but this sometimes requires plucking and moving the string to get it vibrating. By varying the height of the EBow over a sting, players can create an interesting fading in and out effect.

Here is a live concert video of me playing the ebow on the track “Beneath the Surface” lives at The Gatherings Concert Series. I simply played the EBow in regular mode through the clean channel of an preamp direct into the PA system. I ran the signal through a Boss GT-10 to add some delay and reverb. I am play in the Dorian mode to create a mysterious, otherworldly mood.

Getting creative with the eBow

There are several ways to make the ebow sound more interesting and unique. For the track Imaginary Borders, I played the ebow in harmonic mode on my Gibson Les Paul Special yet I ran the signal into a virtual Korg MS-20 to signal process the sound. I layered this with another EBow track straight. I added a touch of digital delay and reverb to give each track some atmosphere. The results were an interesting interplay of textures.

You may also want to try running the signal through other processors and synths, and trying new playing techniques such as alternate guitar tunings, partial capos, and hybrid picking using regular string plucks and using the EBow in hand. You can also use the EBow on other metal stringed instruments such as the banjo, a 12 string guitar, or the Chapman Stick.

The EBow is most definitely a tool to have in the ambient artists (who plays guitar) arsenal. Its use over the last fifty plus year on countless recordings does render it its sound familiar. Its use can easily be cliché’, that said I challenge you to try new creating things with the EBow. Ambient music is all about sonic experimentation. So what are you waiting for? Experiment!
Posted by Dave Luxton at 9:38 PM 1 comment: