Singularity in Sound is my eighth solo ambient instrumental studio release. As with many of my previous albums, an overarching, although often non-specific concept or interest was the impetus for writing. The theme for this one involves a conglomeration of futurism and general philosophical/technology themes. I’m a huge fan of Ray Kurzweils’s writing – there is the obvious influence there. It is the year 2012 after all, and a futurism theme just seems to make sense up against a possible technological dystopia and the whole Mayan calendar Doomsday backdrop. I doubt that I would have bothered to produce an album this year if I actually believed that the end of the world would be here before Christmas. I do find this site from NASA to be quite interesting about the matter though...NASA

My main goal with this album was to push my own capabilities as far as sound production goes within the ambient electronic genre. My intent was to use software based synthesizers as well as hardware synthesizers. During the later part of 2011, I purchased several vintage hardware synths from the late 80’s early 90s to augment my existing collection. As far as hardware synths, I used the Korg Wavestation, Ensoniq SD1, and some sounds from the E-MU Proteus series on the album. I have more than 50 soft synths available and a few of my favorites that I used on this album were the Spectrasonics Omnisphere and the Korg Legacy Cell.  You can hear the Wavestation on the track "Threshold" and on a few others.  I also used some field recordings (highly signal processed) here and there, an Alesis AirSynth on the track “In Through the Wires”, and an eBow and Gibson Les Paul Special on the track “Imaginary Borders”.

From a compositional standpoint, the album has an ambient space music feel that is both uplifting as well as somewhat darker (the dystopian theme). I’m a firm believer that a good ambient album is one that flows smoothly from beginning to end but also consists of interesting contrasts. That said, I did not want to make an album that was too dark or consist of sonic elements that would be perceived as harsh by the listener. I spent a lot of time mixing and mastering Singularity in Sound in order to make it an interesting sonic experience. I made this album for both lovers of ambient music aswell as for sound design fanatics like myself. I hope that you will check it out! 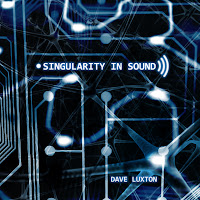 Singularity in Sound is set for worldwide release on May 8, 2012 and is available from CDBaby, iTunes, Amazon and all other major digital download services.
Posted by Dave Luxton at 7:37 PM